Bishop Joseph M. Siegel dedicated the new altar at St. John the Baptist Church in Newburgh during a midday Mass Sept. 23. The dedication marks completion of a three-part plan to address the parish’s most pressing needs through the Stewards of God’s Grace” capital campaign. St. John the Baptist Parish was part of Wave II of the campaign.

Bishop Siegel told a large crowd that it was a great joy to be with them and to dedicate the new altar in their “beautifully renewed church.” He expressed great gratitude to Pastor Father Tom Kessler and the parish building commission for their work on the project, also describing his tremendous admiration of the parishioners for all of their efforts.

During his homily, Bishop Siegel called the new altar a symbol of Christ’s presence in the church and parish that would become “the heart and soul of this sacred space.” He said that, from the altar, all who worshipped there would be sent forth as witnesses of Jesus.

He added that the parish had a powerful patron in St. John the Baptist, encouraging all to seek his intercession that through their lives, they themselves would reveal the powerful presence of God in our world.

In a letter to the parish family that will be published in the bulletin for the weekend of Sept. 28-29, Father Kessler notes that the parish was born in 1866 with 15 families. Today, more than 1,500 families are members, and he noted that their support of the Stewards of God’s Grace Campaign made the church renovation and other significant changes possible.

He adds, “At this time because of your generosity, we have no debt, an enlarged parking lot and the revitalized worship space. I am so very grateful to all the individuals and parish organizations that have helped in this entire process.”

Parish Business Manager Paul Keller said, “The (diocesan) capital campaign allowed all of this to happen. We paid off parish debt that we had been dealing with for 25 years; we gained 50 additional parking spaces and the church renovation far exceeds my expectations. The feedback we have received from parishioners has been overwhelmingly positive.”

Kevin Stuckwisch of Indianapolis-based Entheos Architects, which handled design for the renovation, said the whole project “came together really nicely.”

The large crucifix that had been placed to the left side of the altar area (when facing the altar from the back of the sanctuary) has been moved to the center, directly behind the altar. With the new altar, made of granite obtained from Utah, the space is stunning. Stuckwisch said that Entheos specified paint, tile and carpeting in earth tones that make the sanctuary and the narthex “a lot warmer.”

Keller agreed, and added that with a few minor exceptions, all of the contractors who worked on the project were from the greater Evansville area. Danco Construction was the lead contractor. Keller said the renovation of the sanctuary took 105 days, from May 27 to Sept. 13. During that time, the parish celebrated Masses in a temporary space in the school center.

In his letter to parishioners for the bulletin, Father Kessler said he was “sincerely grateful for the patience of our community during this time.

“We stand on the shoulders of our ancestors of faith! We have a deep gratitude for those who had a vision and mission of faith for St John the Baptist community in 1866! Today we believe that God is still calling us to ‘deep water’ ( Luke 5:4), that we are (called) to make the table of our Lord bigger!”

The Message thanks Father Kessler, Kevin Stuckwisch, Paul Keller and the entire St. John the Baptist Parish staff for their help with this story. 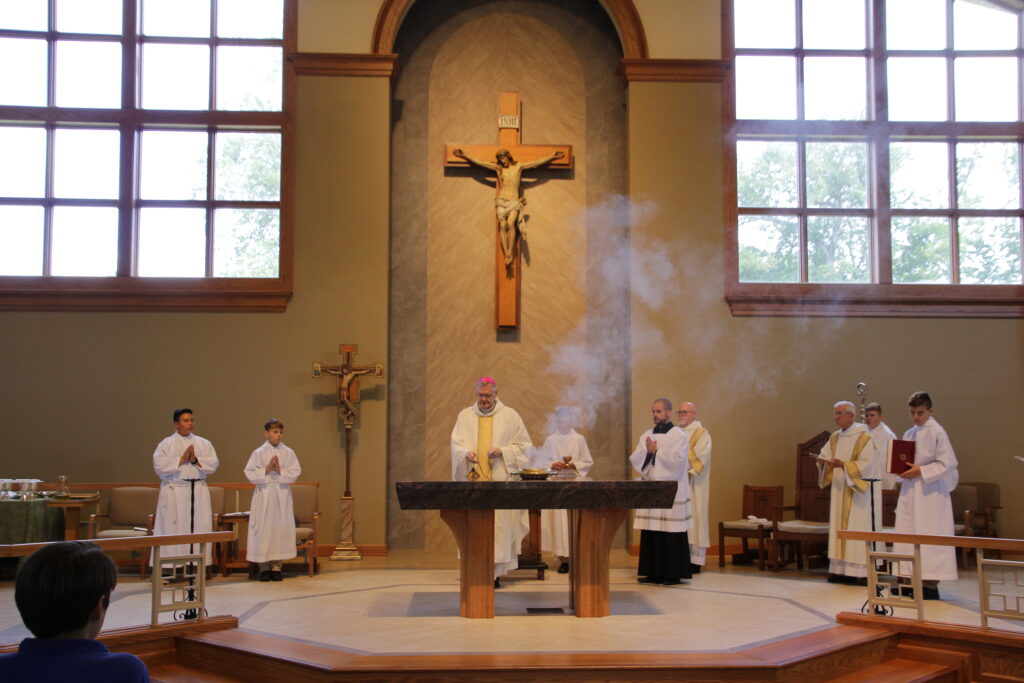 Bishop Joseph M. Siegel censes the new altar in St. John the Baptist Church in Newburgh as he dedicates it during Mass Sept. 23. Sitting on the altar is a brazier with incense. The Message photo by Tim Lilley 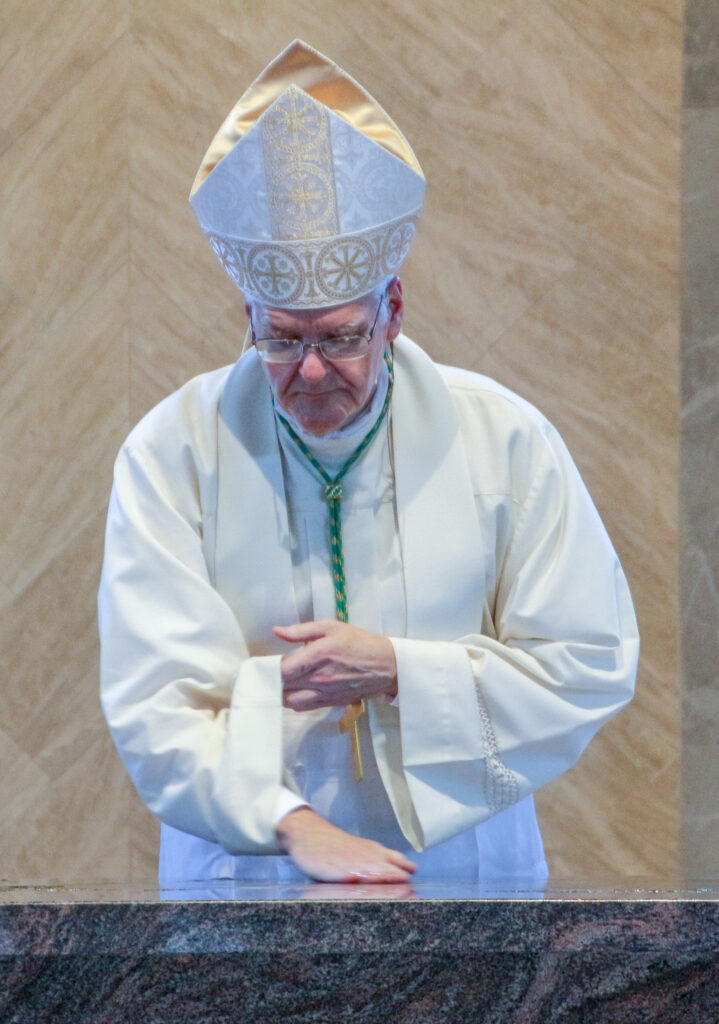 The bishop anoints the altar with chrism during the dedication ceremony. The Message photo by Tim Lilley

The bishop kneels before the Crucifix during the Litany of Supplication at the beginning of the Prayer of Dedication and the Annointings. The Message photo by Tim Lilley 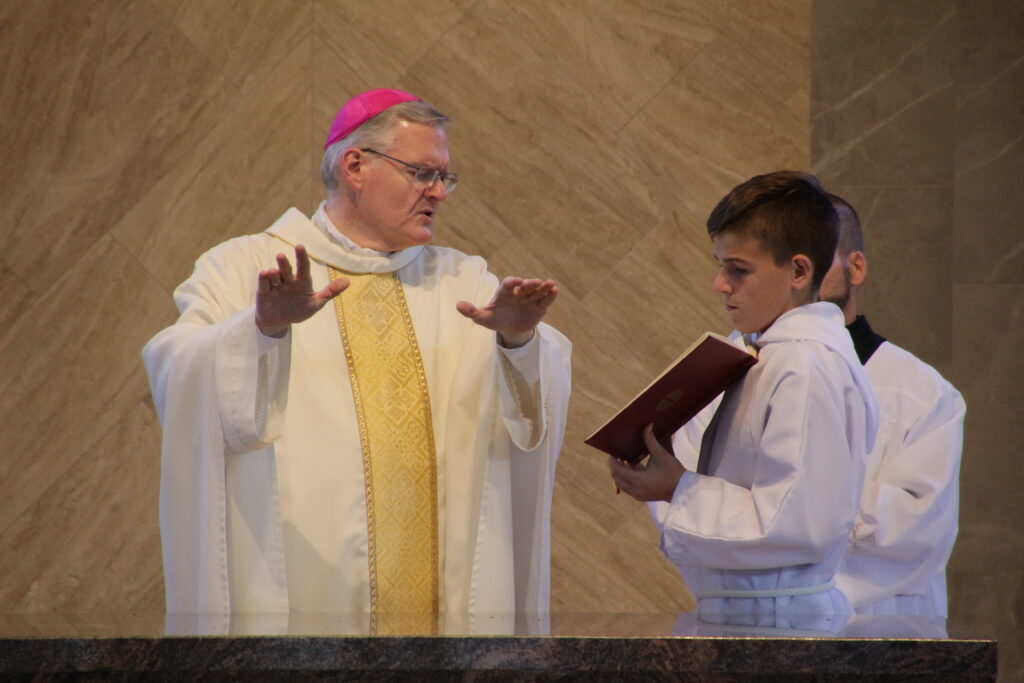 Bishop Siegel blesses the altar during the Sept. 23 Mass. The Message photo by Tim Lilley