As Michael R. Heinlein watched racial violence and counter-protests erupt across America during the summer of 2020, he kept thinking about what he and others could do with their gifts and talents to contribute to healing and the greater good.

An editor and writer, Heinlein, 36, of Fort Wayne, wrote “Black Catholics on the Road to Sainthood,” which profiles the six African-American Catholics who are candidates for canonization.

“What I was hoping to do with this book,” Heinlein explained, “is to show holiness is the answer, sanctity is the answer, and that these six individuals in particular are models for us of how to address the questions that were re-emerging in our society again. That’s what kept coming back to me in prayer.” 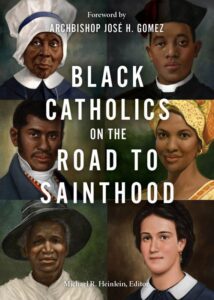 Heinlein works as editor of the website SimplyCatholic.com and its e-newsletter, both of which are published by Catholic media nonprofit Our Sunday Visitor in Huntington. He contributes articles to Our Sunday Visitor’s weekly newspaper and to its The Priest magazine. He has also written several Our Sunday Visitor booklets and pamphlets, and serves as theological adviser for OSV Kids magazine.

In addition to his work, Heinlein serves as one of the masters of ceremony for Bishop Kevin C. Rhoades of Fort Wayne-South Bend. Heinlein and his wife are also going through formation to make promises with the Association of Pauline Cooperators, a lay-oriented group within the Pauline Family founded by Blessed Father James Alberione of Italy.

Just as many other people, Heinlein was moved by the racial divide tearing America apart during the summer of 2020. He submitted a manuscript idea for a book about African-American candidates for sainthood, and Our Sunday Visitor approved it.

The candidates are in the early stages of the canonization process, which can begin after a person’s death: Mother Mary Lange (circa 1784-1882), Julia Greeley (circa 1833-1918), and Sister Thea Bowman (1937-1990) each have been named a Servant of God, the initial step in the process. Pierre Toussaint (1766-1853), Henriette Delille (1812-1862), and Father Augustus Tolton (1854-1897) have been declared Venerable, which means the Vatican’s Congregation for the Causes of Saints has reviewed evidence collected about the candidate’s life and has found he or she died as a martyr for the faith, offered his or her life for others, or exhibited “heroic virtue.”

The book, released in February 2021, is believed to be the first one profiling all six African-American candidates for sainthood, said Heinlein, who is distantly related to Delille through an ancestor in the 1700s.

Heinlein wrote a brief biography of each saint candidate, as well as an introduction and afterword. Each biography is followed by a reflection on the candidate by a Catholic writer, most of whom had been actively commenting on the racial division during the summer of 2020. Heinlein wanted the book to include the voices of Black Catholics and others in the Church because it is a universal church, and he wanted voices who also believed holiness is the key to healing. Archbishop José H. Gomez of Los Angeles wrote the book’s foreword.

“I’ve have gotten a lot of positive feedback about it,” he noted, “and I’m grateful for that.”

He has always been interested in sainthood causes, he said, and especially in the stories of these six candidates.

“They excelled in the virtues,” he explained. “In these six cases, they all experienced racism but they never dished the hate back. They were very Christ-like in that way. So, they serve as a model for us today, not only talking about the issues of racial justice, but we all experience the violence and hate of a divisive culture, a divisive society. And how do we do our part to bring the light of Christ to the world around us? I think these six all offer something to every Catholic.”

Learn more: “Black Catholics on the Road to Sainthood,” edited and partially written by Michael R. Heinlein, is $9.95 in paperback and also is available as an e-book. It and his other books are available wherever books are sold, including Our Sunday Visitor at www.orderosv.com.