There is a treasure trove of history in Vincennes, Indiana. As early as 1675, French missionaries arrived to share the message of Jesus Christ to a small populace; these men offered the people an opportunity to be part of salvation history. Notably, in 1779, a different kind of emancipation took place when George Rogers Clark and his Virginia Militia defeated the British at Fort Sackville near Vincennes. This victory helped open up the Northwest Territory of the United States during the Revolutionary War. The presence of Catholic missionaries in Vincennes during the early 17th century opened up a new world of Christianity.

An estimated half-million people lived in Indiana by the 1830s, and less than 25,000 were Catholics. There was a need for Catholic priests in Indiana. In St. Louis, Missouri, on October 28, 1834, Bishop Joseph Rosati consecrated Father Simon Bruté as the first bishop of Indiana. The Diocese of Vincennes became the 13th Diocese of the United States.

Bishop Bruté placed his cathedral under the patronage of St. Francis Xavier, the patron of missionaries, and his diocese under the patronage of Our Lady. There were only three priests assisting Bruté in this mission. The settlements in the four corners of Indiana and part of Illinois covered 65,000 square miles. Bruté covered 200 miles from one settlement to another on horseback. He was a frail man who accomplished great things in his five years as the Bishop of Vincennes. He founded St. Gabriel College in 1837 and connected it to a theological seminary to train men for the priesthood. By 1839 the diocese had grown to 27 parishes.

Bruté made trips back to France to solicit priests and funds to build churches. He convinced Mother Theodore Guerin, Foundress of the Sisters of Providence to come to Indiana where she established St. Mary-of-the-Woods.

Bishop Bruté wrote to his brother, “My health is failing fast . . . but every day my heart experiences great joy at the unremitting progress of the Church. Although I should like to remain a little longer I am resigned to the Master’s will. Now, a Catholic bishop of Vincennes, by the appointment of His successor of Peter, the vicar of Christ on earth, and visible head of His Church, in communion with all the other successors of the apostles in all dioceses of the immense Catholic Church, I do, in life, or in death, humbly rejoice before my God.”

On June 18, 1839, Bruté wrote his final petition. “I recommend to all the faithful of
the diocese to persevere above all trials in the Divine faith and in the Catholic, Apostolic Church of God on earth, having the doctrine of Christ from the days of Peter and the apostles onto the end of time.” On Friday, June 21, 1839, the last rites were given to the dying 60-year-old servant of God. He died on June 26, and his last words were those of Christ, “Sitio,” “I thirst.”

In 1970, Pope Paul VI elevated the oldest church in Indiana, St. Francis Xavier, to the status of Minor Basilica. The first four Bishops of Indiana are buried here in a crypt. In 1968, a grant was obtained from Eli Lilly to fund the building of a new library that opened in 1970. It houses more than 5,000 books personally owned by Bruté, some dating back to the 1500s, and a personal bible from St. Elizabeth Ann Seton, who sought spiritual direction from Bishop Bruté.

A Carmelite Monastery in Indianapolis was purchased in 2004 by Archbishop Daniel Buechlein to establish a college seminary to prepare men for major seminary. The first alumnus of Bishop Bruté College Seminary is Jeff Read, who was ordained in June 2012 for the Diocese of Evansville. He is now the pastor at St. Isidore the Farmer Parish in Celestine.

In September 2005, Archbishop Buechlein opened a Cause for Canonization for Bishop Bruté. The current postulators, Father Joe Newton, Father Tony Hollowell and Monsignor Fred Easton from the Archdiocese of Indianapolis, report that the historical investigation is underway.

June 26, 2019, was a special day in Vincennes. A pilgrimage was planned to celebrate the 180th anniversary of the death of Bishop Bruté. The Archdiocesan Vocations Office and the Serra Club of Indianapolis plan a three-day “Bruté Days” event every summer at the College Seminary. This year a trip to Vincennes was on the schedule, and an invitation was extended to the Vocations Office of the Diocese of Evansville. A group of 140 people: junior high students from Evansville who attend “Savio Night” at the Father Deydier House of Discernment, high school students attending Bruté Days, college seminarians, priests, chaperones, parents and Serra Club members gathered to honor Bruté with a Mass and tours of the Old Cathedral Complex and George Rogers Clark Memorial. Volunteers from St. Francis Xavier Parish provided wonderful hospitality and lunch in the parish hall. Pamela Nolan and Richard Day, historians and members of the parish, were tour guides for the day. Parochial vicar Father Simon Natha welcomed Father Tony Ernst, who arrived as the new administrator for the parish on this special day.

The weather was perfect, but the highlight of the day was the celebration of the Eucharist in the Old Cathedral. There were nine priests and one deacon from the Archdiocese and the Diocese of Evansville, including Vocation Director Father Eric Augenstein of Indianapolis and Evansville Associate Director Father Tyler Tenbarge, who also serves as director and chaplain of the Father Deydier House of Discernment. Father John Schipp, a retired priest of the Evansville diocese and former pastor of St. Francis Xavier Parish, attended and helped select a chalice used by past bishops from the vault at the library to use for the Mass. Father Joe Newton of Indianapolis was the main celebrant, and his homily included some history about Bruté. Other priests concelebrating from the Archdiocese were Father Tony Hollowell, Monsignor Fred Easton and Father Kyle Rodden. Deacon Paul Vonderwell from St. Francis Xavier Parish assisted.

We all thirst for the love of God. Pray for the cause of sainthood for this humble servant of God, who helped create the history of faith in Vincennes with the teachings of Christ, a treasure to protect, while building up the Body of Christ.

Zoe Cannon writes Gratitude for the Gift of Faith for The Message. We thank her for agreeing to provide this wonderful report in lieu of a column for this issue. In a future issue, The Message will publish a feature by Maria Sermersheim on the Minor Basilica of St. Francis Xavier and the museum.

The current postulators of the Cause for Canonization of Servant of God Bishop Simon Bruté are Father Joe Newton, left, Father Tony Hollowell and Monsignor Fred Easton from the Archdiocese of Indianapolis. Photo by Zoe Canon/Special to The Message 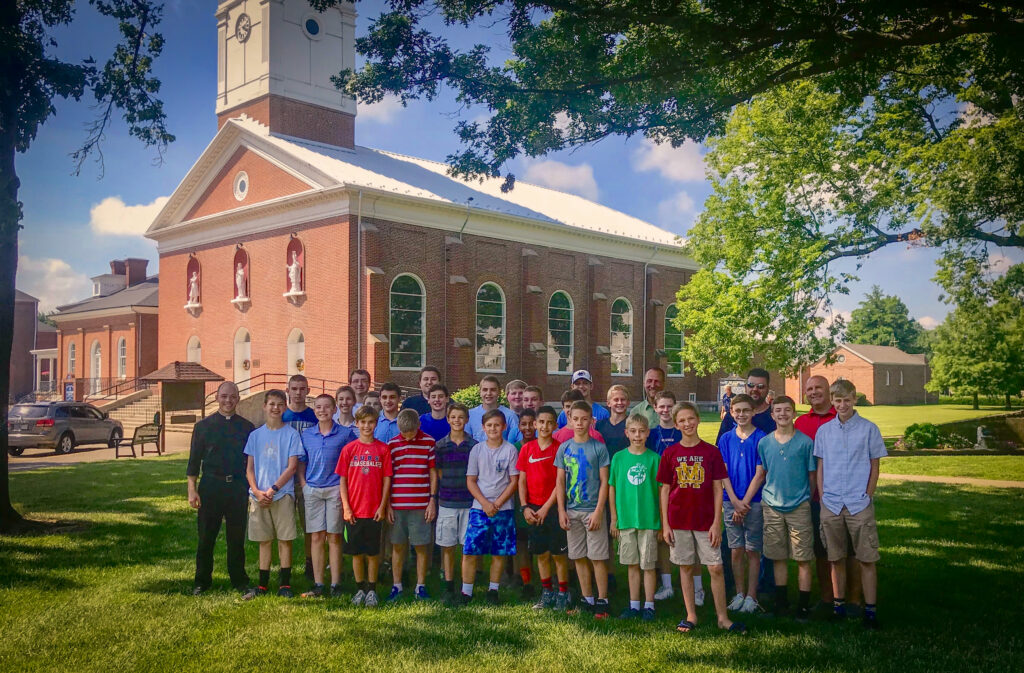 With the Minor Basilica of St. Francis Xavier in Vincennes behind them, Father Tyer Tenbarge, left, associate director of vocations for the Diocese of Evansville, stands with youngsters who attend Savio Nights at the Father Deydier House of Discernment with some of their fathers, who made the June 26 pilgrimage to Vincennes, and Diocese of Evansville seminarians Tyler Underhill and Keith Hart. Submitted photo courtesy of Father Tyler Tenbarge