I was two. As the story goes, my parents and newborn brother, Mike, were living in a duplex on 30th St., near Marian College in Indianapolis. One day, a man, unbeknownst to my mother, walked into the apartment only to find me in my bedroom down a dark hall. As mom looked on in horror, he made a verbal threat to kill me, and she did the only thing she knew to do; she screamed hysterically and ran for help.

Five months later, we were in Evansville where my father had grown up, but this time in a little A-frame house on Cave Avenue. After a few months of assessing different nearby parishes, our family chose St. Agnes in the heart of Howell. Long the converging point of farm fields and railroad tracks, we quickly found ourselves among families that had developed and lived on the land that would bear this austere little church on the Westside. 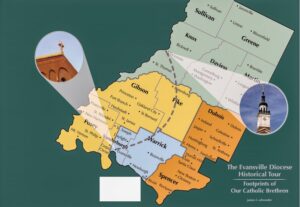 The years passed by, and I found myself walking through the schoolhouse next door. Little did I know that my future wife would join me in the hallways a year later. Nights were spent sweating in the old upper gym during wrestling practices. Days were spent in the server’s quarters, trying to refine the routine that would evolve as different priests came and went. Games of kickball and four-square became a mainstay at recess, and to this day it is impossible to forget the juvenile discomfort that came with the first introduction to sexual education and the battles over (not) wearing dark socks to Sunday Mass. Even after many years, a return to St. Agnes under the sight and sound of that familiar bell atop the freestanding sandstone column reminded me of where I had been and to whom that I owed.

Recently, we returned to St. Agnes after a day spent swimming, golfing and enjoying each other’s company at the park down the road. We made it as the bell tolled. The church was full of many families that we had come to know, whose lineage was baptized, confirmed, married and prepared for burial within its sandstone facade. They had grown older. We had grown older. No longer were we the ones shuffling in pews and being taken to the back to quiet down. Now it was our kids’ turn, and as I stood in the back with Louis, who was a wee younger than when I first arrived, I listened to his familiar voice from the pulpit. His daughter, my wife, sat with our five other children near the clear glass windows that humbly welcomed the light in from outdoors.

My father-in-law would be the first to tell you he did not deserve to be where he stood. From the barbershop to the fire station to one day laying prostrate on the cold, tile floor at St. Benedict’s Cathedral, his circuitous route to the permanent diaconate was mired in humility. Yet, as always, he was a man who spoke with conviction about the most difficult topics. Death was the least of his fears.

His homily began on a stern note. “There are those in the world today who do not want to hear or think about what St. Paul has to say in today’s Second Letter to the Corinthians,” he said. From there, he reminded us that the last four experiences that all human beings will face are death, judgment, heaven and hell. What followed was a reminder of the teaching of purgatory, and the cleansing process required for heaven that all who remained in God’s grace and friendship, but not without sin, must undergo. In quoting Bishop Fulton Sheen, “Sin is not the worst thing in the world. The worst thing in the world is the denial of sin.”

He closed with a recollection of an “Our Sunday Visitor” article from some 17 years earlier that thanked God for purgatory because without it, “we would have hell to pay.” “And so,” he stated, “we pray for all of our loved ones, eternal rest grant unto them, O Lord, and let the perpetual light shine upon them. May their souls and all the souls of the faithful departed, through the mercy of God rest in peace.”

The church was still. I had grown up, or so I thought. But I was never too old for lessons. For almost 20 years, I had returned to this parish for lessons; lessons of cleansing, of forgiveness, of celebration, of truth. It had been a place where I had found stable ground, and where the fallibility of our lives met the purity of our souls. Times may have changed, but they were much the same. This time, though, it was my children, not me, peering from just above the pews.