The Diocese of Evansville’s Father Deydier House of Discernment is having an impact on scores of young men — not just the young adult men who have been in residence there over the past nine months. The house is located in the rectory on the Sacred Heart Campus of St. Boniface Parish, on Evansville’s west side. Have you wondered what the house is all about? Father Tenbarge related a story that explains it pretty much perfectly.

“After a Monday night formation conference in the fall, one of the residents expressed dismay that I ‘hadn’t talked more about them becoming priests.’ I responded to him that it isn’t my job to make them priests or to push it on them. My role and the purpose of the House is to help make them better Catholic men. If they learn to pray, and if they give themselves to the Lord in their daily lives, their vocation will become clear. Then, they can choose to follow it freely.”

Sacred Heart Church hosts a Holy Hour for Vocations at 6:30 p.m. on Mondays. It includes Adoration and Confession, and Benediction is at 7:20 p.m. Mass follows at 7:30 p.m. The average weekly attendance this spring is around 140 people, with nearly half of those present under the age of 30. The formation conference for house residents follows Mass.

Father Tenbarge also organized monthly “Savio Nights,” which began last October. Those events have drawn 60 young boys from 14 parishes across the diocese — many with their fathers joining them — for fraternity and faith formation. Each Savio Night has begun with an hour of pizza and games for all.

On May 19, house residents, Savio Night attendees and hundreds of people who have supported the House during its first year of operation — some 200 households from parishes across the diocese — gathered at the Sacred Heart Campus for the first Deydier Day. Father Tenbarge said the event was invitation-only because there was a limit on how many people they could accommodate, and the reservations hit that limit.

“Deydier Day was a celebration,” Father Tenbarge said. “We had a Mass of Thanksgiving where we recognized residents Ethan Dale, Michael Mosbey, Clint Johnson and Isaac Memmer, who received plaques and photos from this year. Our fourth resident Ethan could not be with us for the celebration because he was on a pilgrimage in Europe. Michael, Clint and Isaac then helped me recognize all the boys who attended Savio Nights this year. Each teenage guy received a St. Dominic Savio medal that had been blessed by Pope Francis.”

Members of the Evansville Serra Club — active on many levels in promoting vocations to the priesthood and religious life — played a big role in Deydier Day. “Following mass, the Serra Club of Evansville provided a picnic-themed dinner for the attendees,” said club President John East. “Club members were all hands on deck to prepare and serve the meal for its new core mission: supporting the House of Discernment.”

So . . . how did this all start? Father Tenbarge said that Bishop Joseph M. Siegel, with the advice and recommendations of several priests of the diocese, began establishing the Father Deydier House of Discernment in the spring of 2018. “Bishop Siegel called and asked me if I would be willing to serve as its Chaplain and Director shortly thereafter, and I readily accepted,” Father Tenbarge said. At the time, he was completing a year of canon law studies in Rome. “

Even before entering seminary formation in 2009, I worked with college students and young adults in leadership development,” he added. “I enjoy it, and I enjoy even more getting to work with them in the context of discerning Christ’s call in their lives. What could be more rewarding or important?”

Father Tenbarge said the initial program design was based on a similar house in another diocese, but he added that he knew what he hoped to accomplish. “I guess my initial vision was simple: help young men become better Catholic men, and they will be able to hear the voice of God in prayer.”

When he got home from Rome last summer, Father Tenbarge said that renovation work was already underway at Sacred Heart’s rectory. “Almost immediately, people from all over the diocese came asking how they could help — and we received donations and volunteer labor easily worth more than $40,000 in just two months. People painted and donated; people hauled off and brought in; they filled the fridge and cleaned up the woodwork,” he said. “When one of the residents arrived in mid-August, he walked around the house and said, ‘Is this all for us?’ I smiled and said, ‘Yes it is.’”

Bishop Siegel blessed the house in September, and the residents quickly immersed themselves in Catholic faith formation. While living at the house, residents refrain from dating relationships while investing in their prayer lives.“

Daily prayer dotted the week, as did adoration, Mass, and meals together,” Father Tenbarge said. “Each Monday evening, following our Monday Night Holy Hour and Mass for Vocations at Sacred Heart, the residents and I gathered for a formation conference of sorts. I would give a presentation on some aspect of Catholic life; and this spring, I invited priests, married people, and families of priests and seminarians to share their perspectives on vocational discernment.”

He called the formation the residents received “a diocesan effort,” and expressed gratitude for all the people who stepped up for the house and all the ways they helped.

“We covered topics in the fall on Catholic faith and practice — how to pray, ways of praying, developing virtue, using spiritual direction, etc.” Father Tenbarge explained. “The spring’s focus was more specifically geared toward helping the residents come to an individual decision on their next step: marriage, priesthood, celibacy, family life, etc.”

He added that the residents joined him for a weekend silent retreat at a property in Pike County, Indiana. “We spent the time reading, praying, and sharing a bit of how God’s grace has been active in their lives this year,” he said. “It was fruitful and fun, and they were grateful to have the time to reflect.”

Father Tenbarge said the House of Discernment can accommodate up to six residents, and there are spots open for the fall. “Any young man who would like the time and the space — and also the support — for opening himself up to what the Lord has in store for his life; that’s what this House of Discernment is for,” he said. “It’s for him. In our final individual meetings this spring, every one of the residents told me that’s what they appreciated most about living here, and I know more will continue to benefit like these first four have.”

He added that he’s met with three young men who attended the Monday Night Adoration and Mass at Sacred Heart. “All three of them are in different places of discernment, and any of them might apply,” he offered. “However, I think that shows how abundant the harvest of vocations already is. We simply need to tend the fields.”

Contact Father Tenbarge at trtenbarge@evdio.org for more information on the Father Deydier House of Discernment, or if you are interested in helping support the house.

One resident talks about the impact of the House of Discernment

BY CLINT JOHNSON
Special to The Message

Editor’s note: In preparing for this feature on the Father Deydier House of Discernment, Editor Tim Lilley asked House Chaplain and Director Father Tyler Tenbarge whether one of the residents might be willing to talk about his experience there. Resident Clint Johnson graciously agreed, and what follows are his unedited answers to some basic — but very important — questions about the house and its impact.

What is it like living in the house of discernment?
The House of Discernment thrives on community of those who live there. All of us are searching for a common goal, and that is to know God’s will for our lives and how we can best serve Him and His Church. We pray as brothers and encourage each other to always stay focused on the goal — especially when our spiritual life becomes dry. We wake up every day prepared to lay down our own desires so that we may serve God and each other.

What would you say to someone who is thinking about moving in?
If you are thinking about moving into the house, I would encourage you to stand back and reflect on what God has done in your life so far. Making this step may not make sense for you at this time — or it could be exactly what you need to show God that you want what He wants. For me, moving into the house was an act of faith. I knew what I wanted to do with my life, but deep down I knew I wouldn’t be truly happy until I intentionally discerned God’s plan for me. I needed a community to help me understand this; we weren’t created to be alone.

You’re applying to seminary this fall. How did the house help you come to your decision?
Yes! Father Tyler did a fantastic job in revealing different avenues that we could approach the discernment process. When I moved in, I was very impatient and wanted an answer right away; but as I began to pray more, go to Mass more often and meet with my spiritual director, I felt more at peace with uncertainty. In this peace, I somehow felt that God would tell me soon, but I needed to be patient. Soon enough (around Christmas, four months after moving in), the call to seminary was not a burden to think about, but rather I felt called to take one more step as entering the house had been before. The routine life of prayer we have at the house makes it easier to discern this calling. 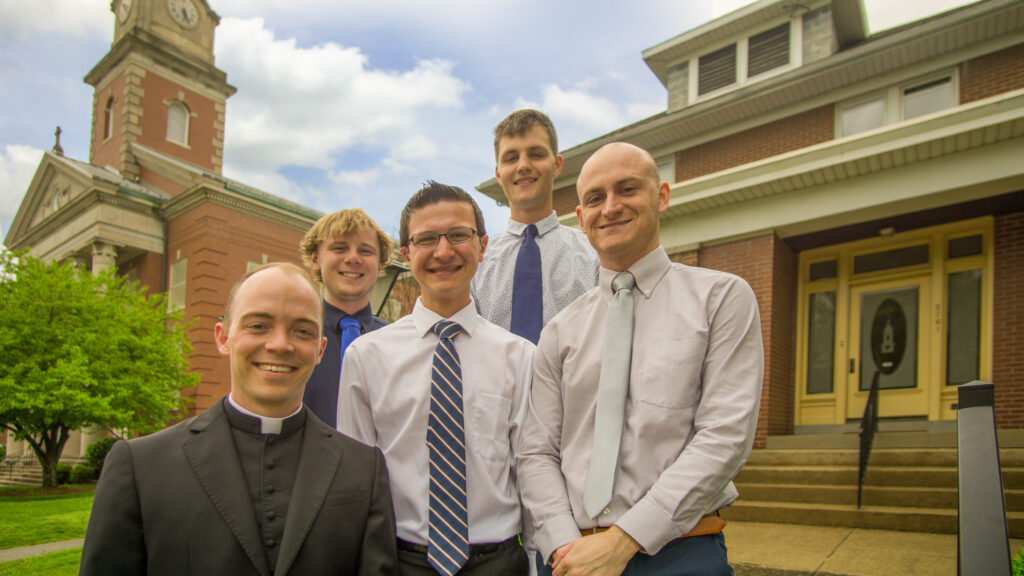 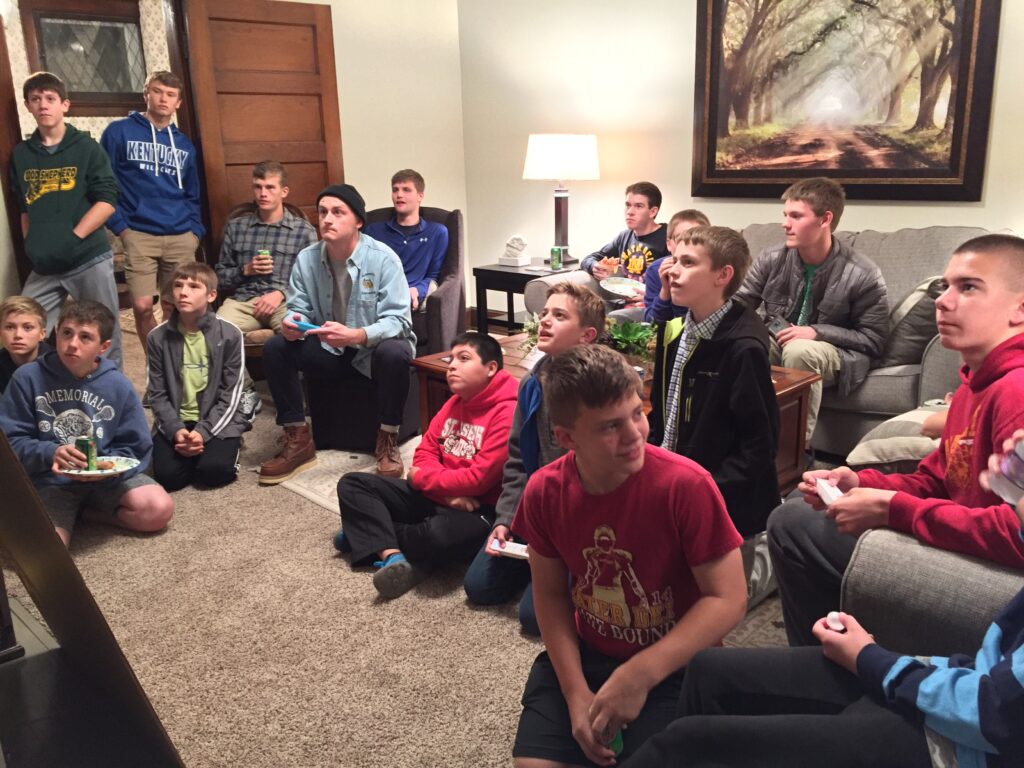 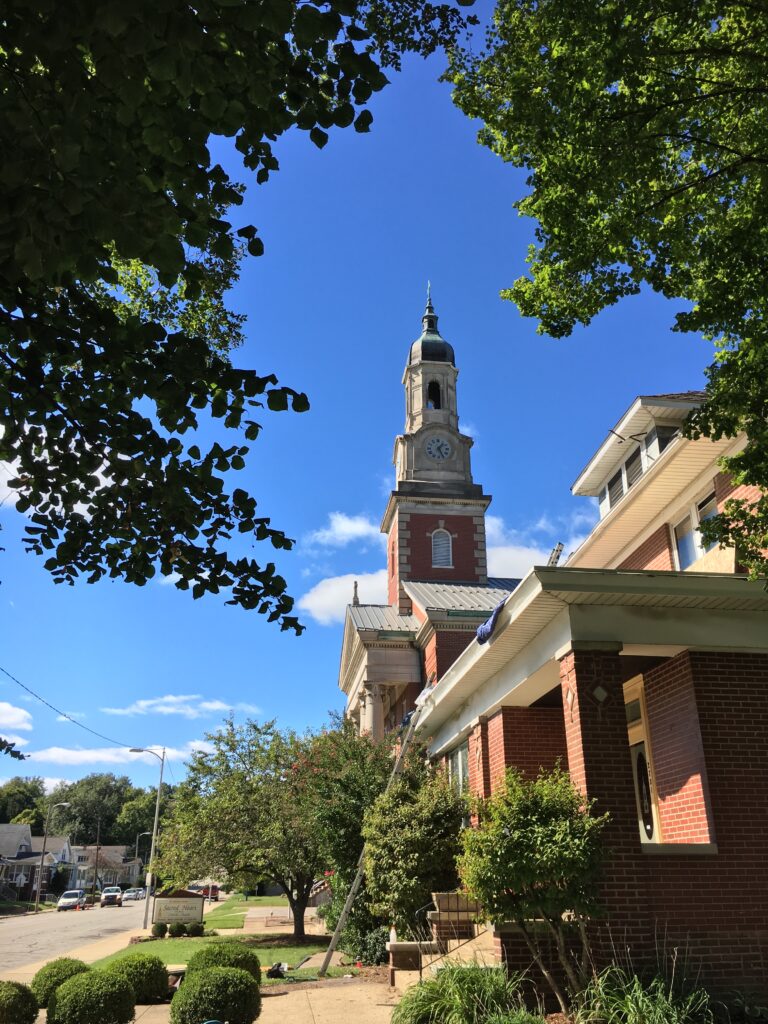 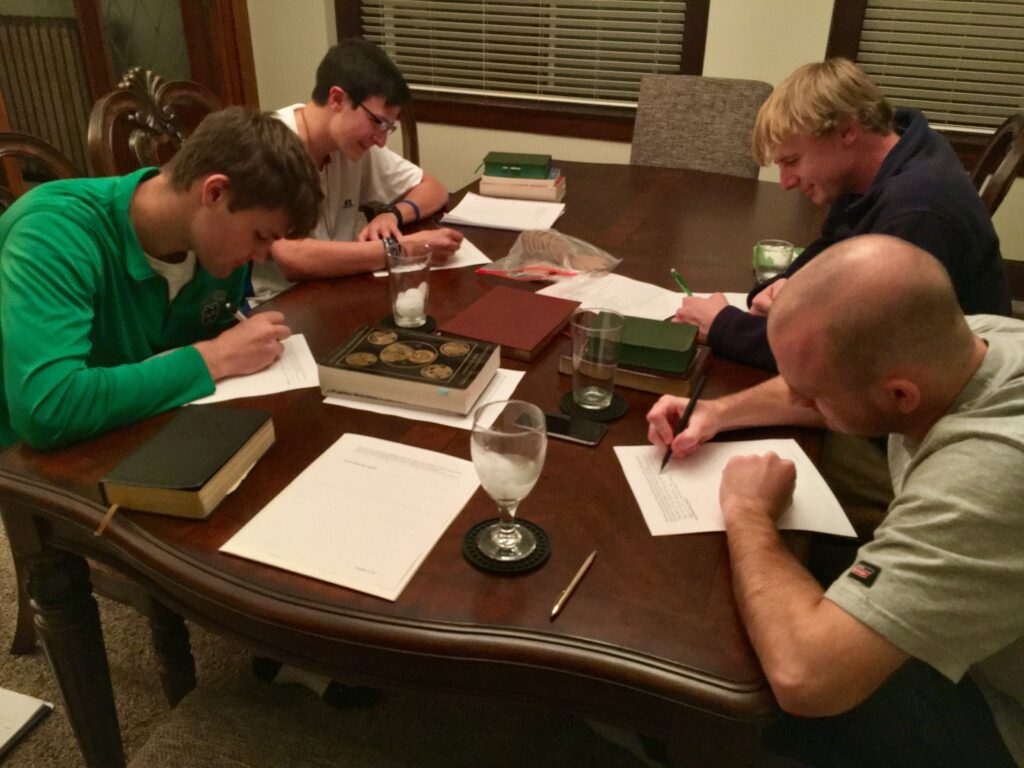 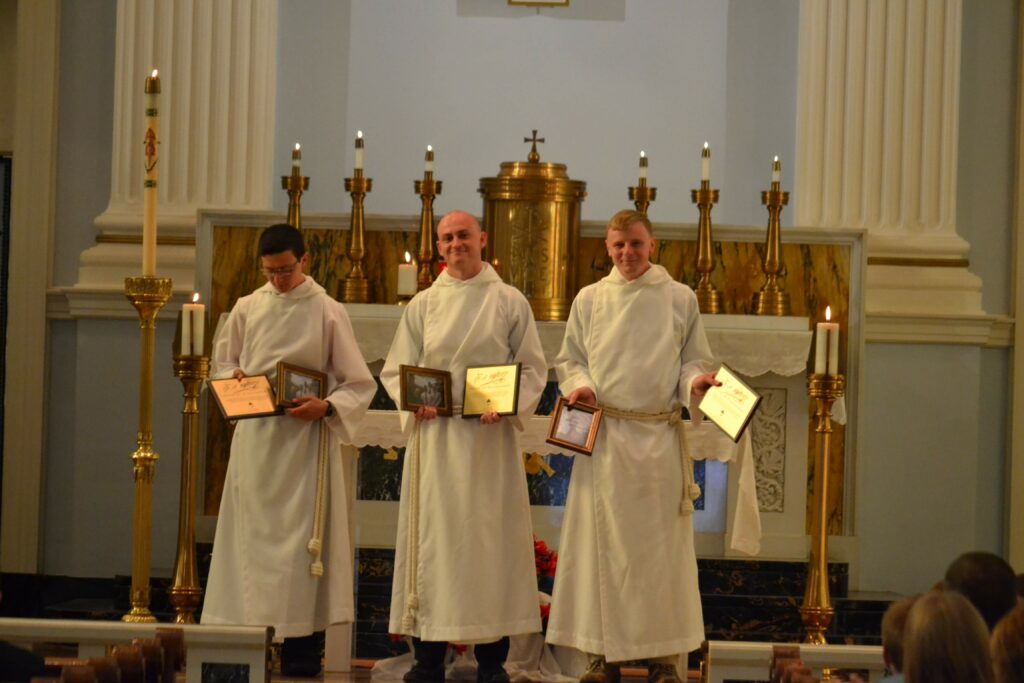