The packed church was standing-room only for Father Sauer’s final Mass on June 23, just days before his retirement was official. Deacon Tom Evans assisted him during the Mass.

Father Sauer was ordained to the priesthood on March 25, 1977. After 42 years of priestly ministry at 14 parishes across the Catholic Diocese of Evansville, his retirement was effective June 26.

Father Sauer, 69, joked it may appear he’s a great preacher because of the large crowd at his last Mass, which included many of his family members, but he teased parishioners and said they were not there to hear him preach but to say goodbye. The congregation erupted in laughter at his joke.

Father Sauer had one final message to share with his parish of eight years before he bid adieu. Quoting a line from William Shakespeare’s “Romeo and Juliet,” Father Sauer told parishioners: “Parting is such sweet sorrow.”

“That’s true for everything in life,” he said. “When we relocate to a new job and have to leave family, friends, parishes and other people behind, or when someone dies and (we are) filled with grief and sadness and yet through all those circumstances . . . The sweetness is we have memories, wonderful memories, of what life has been with those people we have loved.”

Father Sauer assured his parish family he holds on to many beautiful memories, including those of Octoberfest, Men’s Club sausage and pancake breakfasts, summer socials, marriages, baptisms, as well as sad times.

He recalled a funny memory one day when a young boy saw him walking his three dogs and the child said: “‘Look, there goes God and his dogs,’” Father Sauer said with a laugh.

Some of Father Sauer’s “happiest memories,” he said, are at the Eucharist when he sees his parish family after a week of being apart.

“It all seems to come together at the Eucharist because it’s who we are,” he said. “We’re people of faith, hope and love who worship our God and here we serve one another.”

He thanked St. Matthew parishioners, as well as those in the other parishes he served over the years, for the “support and love” that was shared with him.

“I will always carry you in a special place in my heart,” he said.

Following the Mass, nearly 400 parishioners and community members celebrated Father Sauer at an open house luncheon in St. Matthew’s gymnasium, including Bishop Joseph M. Siegel, who stopped by to wish him well.

Every St. Matthew School student drew a picture and predicted what Father Sauer would do in retirement. Some of the younger kids imagined he may get more puppies or eat spaghetti. The drawings and predictions were bound in a book as a parting gift for him.

In retirement, Father Sauer plans to stay in his family home in Evansville where he will read, write and paint icons. He also plans to travel.

In the June 23 St. Matthew Parish bulletin, Father Sauer admitted to parishioners it may be the first time since joining the parish in 2011 that he was speechless.

“A simple ‘thank you’ seems so trite to express my gratitude to all of you for your love and support these past eight years,” he wrote.

So Father Sauer gave the parish one last homework assignment and requested they grab their Bibles to read Acts 20:17-38 and St. Paul’s Letter to the Philippians 1:3-11.

He ended with: “God bless you and keep you always in his love.” 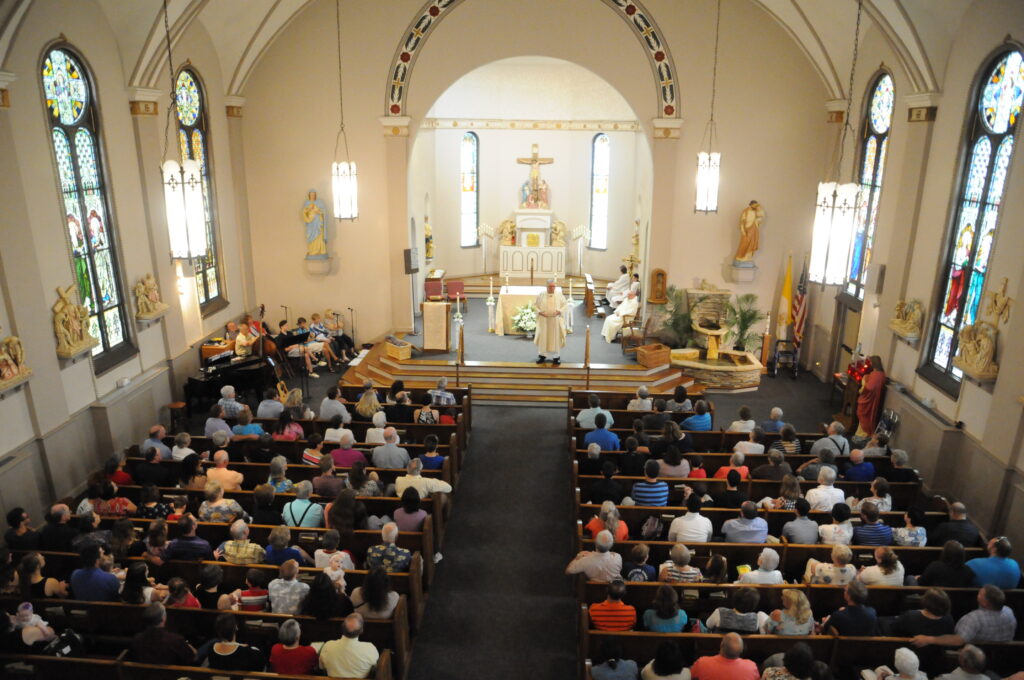 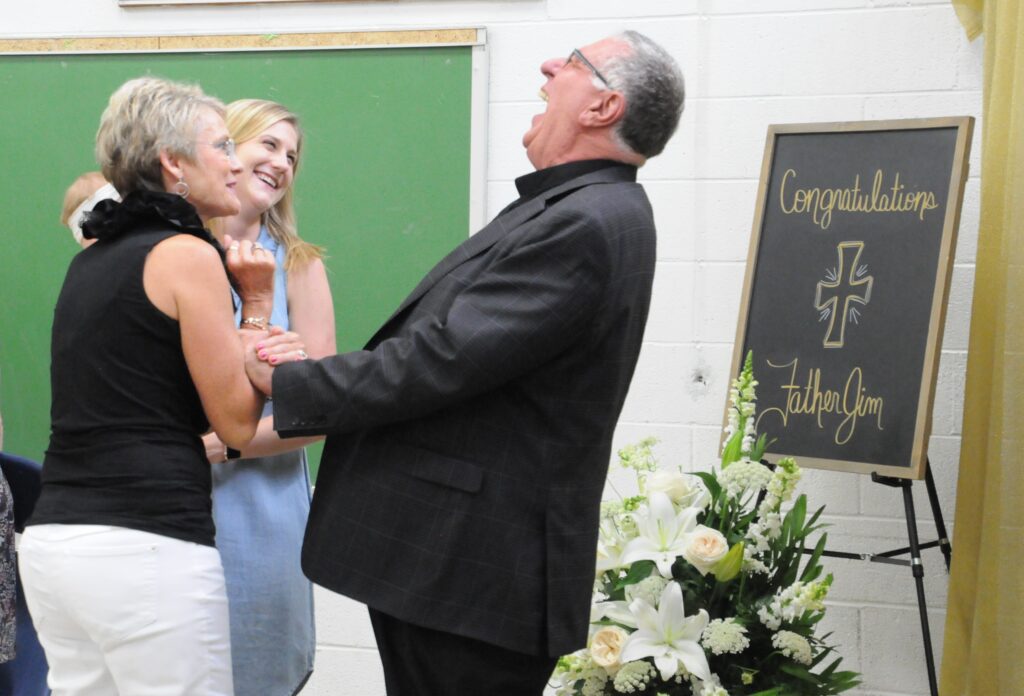 At an open house to celebrate Father Sauer’s retirement, he laughed with St. Matthew parishioners Katie Hoehn, left, and her daughter Keely Burkhart. Keely is holding her young daughter, Millie. 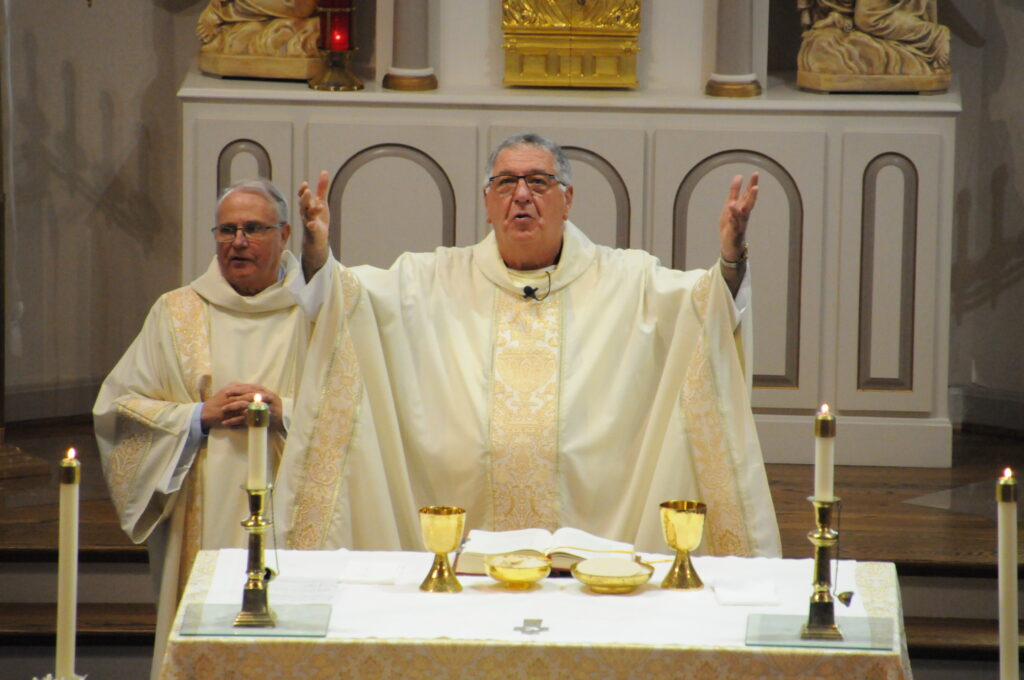 Father Sauer prays the Eucharistic Prayer during his final Mass before retirement at St. Matthew Parish on June 23, with Deacon Tom Evans assisting.

A Prayer Garden was recently installed at St. Matthew Parish, with icons painted by Father Sauer placed in wooden shrines made by Mel Levin. 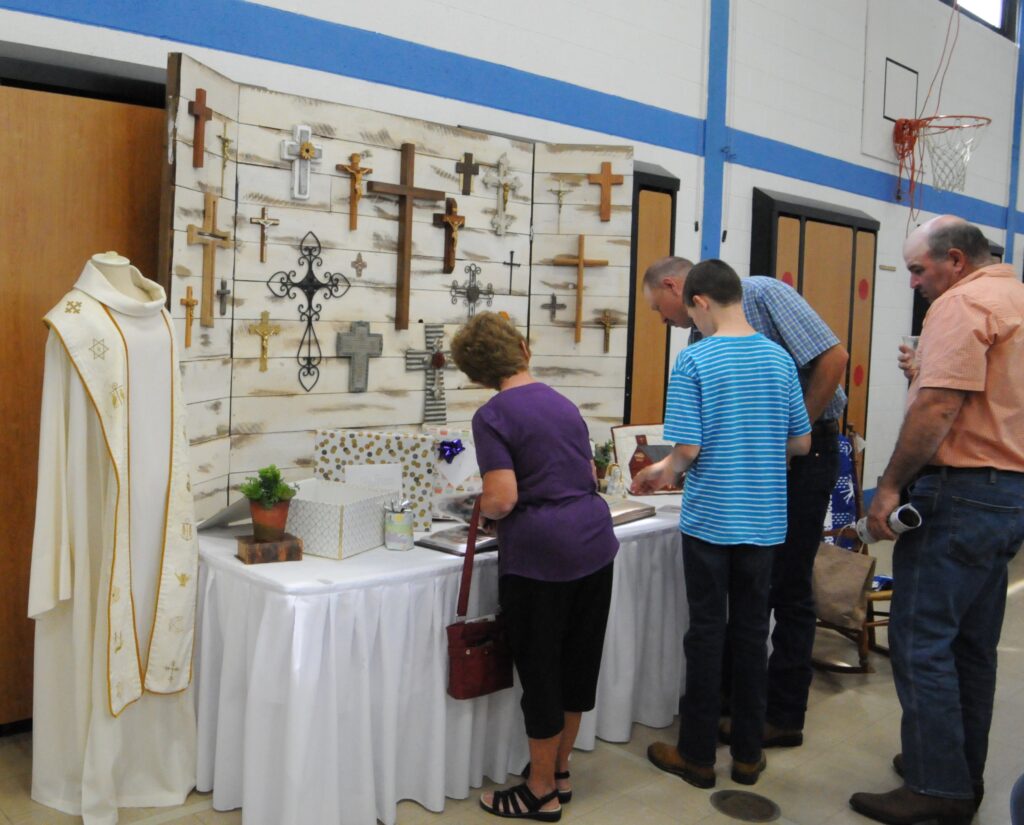 Nearly 400 parishioners and community members celebrated Father Sauer at an open house luncheon on June 23 in St. Matthew’s gymnasium. Parishioners check out photo albums and other gifts that were given to Father Sauer.