Along with two older sisters, I grew up in Newburgh and attended St. John the Baptist for grade school and later Castle High School. My dad works at German American Bank, and my mom was a science/language arts teacher at Boonville Middle School. Sports, extracurriculars and Scouting were a big part of my life growing up. No matter where travel team baseball or our annual Braun family reunion took us, we always found a local parish to attend Sunday Mass. 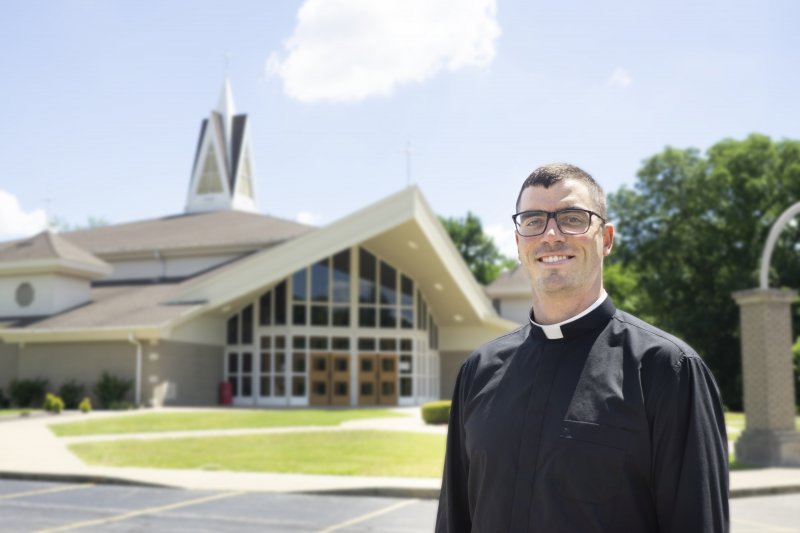 I first heard a call to the priesthood in the second or third grade when my sisters would jokingly say that as the only boy in the family, I could be a priest someday. Despite their own amusement at the idea, from that time on I considered the priesthood as a real possibility. The call ebbed and flowed over the years, stronger at times when I was more involved with the St. John youth group or during Scout retreats at St. Meinrad, and weaker as I got later into high school.

For college, I fulfilled a dream of attending the United States Air Force Academy, where I earned a Bachelor of Science in Operations Research and was commissioned a 2nd Lieutenant in the Air Force. For the first few years, I was very involved with the club cycling team but that gradually took a back seat to my involvement in our Catholic faith community. I gradually developed a prayer life and began to find myself in various leaderships that reawakened the idea of a calling to the priesthood.

I finally decided to go to seminary following a TEC retreat in the spring of my junior year. After a moment in prayer, it was suddenly clear that I could only continue my discernment and truly know if the Lord was asking me to be a priest by going to seminary.

When I arrived at Saint Meinrad, I found a brotherhood remarkably similar to my experience of military camaraderie — men who feel called to a life of structure, discipline and service of a higher purpose — even at the cost of personal sacrifice. I am also grateful for a distinct difference: military service is a highly competitive environment where your worth is based solely on performance, and at the end of the day you will be ranked against your peers. Seminary is a time of discovering your infinite worth in God's love and the profound gift of a calling to serve the Lord and his Church through the priesthood.

Men who think they might have a calling to the priesthood should make daily Mass and confession their highest priorities. The most helpful thing to encourage a vocation is to first pray for this person and second to challenge them to get out of their comfort zone by taking on a leadership position at youth group at Savio Night, or maybe lead a Bible study.