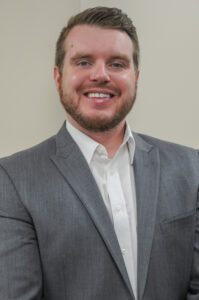 St. James School in Haubstadt has announced the appointment of Eric Chamberlain to serve as its new principal.

Eric will take over the leadership of the school from Angie Johnson, who is retiring at the end of this school year.  Eric currently serves as Dean of Students at St. Benedict Cathedral School in Evansville.

Diocese of Evansville Superintendent of Schools Dr. Daryl Hagan said, “Eric's experience as a teacher and dean of students has prepared him well to lead St. James Catholic School. I want to take this opportunity to thank Angie for her years of dedicated service to our diocese. We look forward to welcoming Eric to St. James.”

Eric said, "I am excited and honored to become part of the St. James team. I look forward to being a role model to the students, a servant leader to the staff and an active volunteer in a community so rich in faith and tradition."