BY BRIAN FRAGA
©Our Sunday Visitor,
reprinted with permission 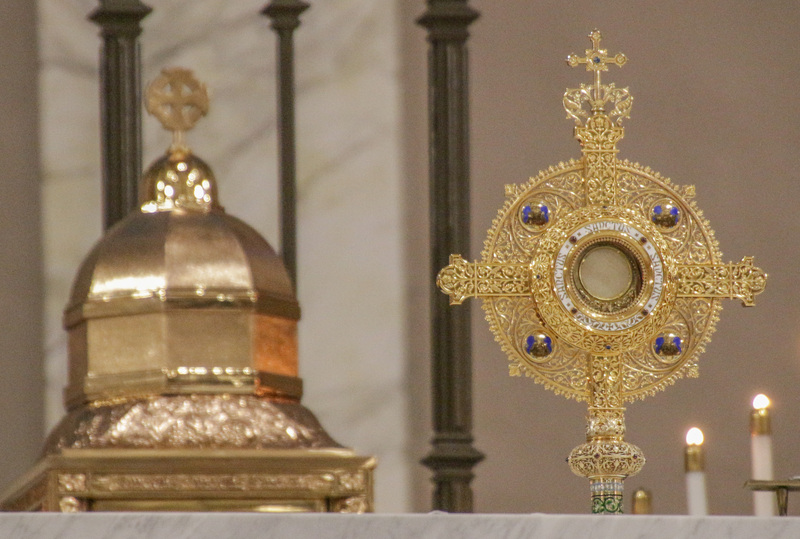 The Blessed Sacrament is exposed on the altar of St. Benedict Cathedral in Evansville. The Message photo by Tim Lilley

Editor’s note: A Eucharistic adoration schedule for parishes across the Diocese of Evansville is available in the Special Features section of The Message website.

The Gospels recount how those who encountered Christ when he walked the dusty roads of Galilee had their lives changed forever.

People are still coming face to face with Jesus, and his presence continues to convert sinners. Only this time, his disciples are gazing upon him in the form of bread, contained in a gilded vessel placed on an altar.

“Nonbelievers will tell you you’re wasting your time, and you have to explain to them, ‘I actually believe that piece of bread there has been mystically transformed into the body and blood of Jesus.’ There is a reality there,” said Michael Schmidt, 30, of El Paso, Texas.

Schmidt, an aerospace engineer, attends Eucharistic adoration for a Holy Hour on the first Friday of every month. Whether he is praying the Rosary or reading a spiritual book, Schmidt said spending time with the Blessed Sacrament has changed his life for the better.

“Modern society can be very superficial, but there is nothing superficial about going to church and sitting or kneeling for an hour in front of the Blessed Sacrament because you couldn’t do that if you didn’t believe it,” Schmidt said.

Other Catholics from across the country who regularly attend Eucharistic adoration also told Our Sunday Visitor how adoring the Blessed Sacrament has impacted their spiritual lives.

One person attributed his hours before the Eucharistic Lord with delivering him from a pornography addiction. Others described growing in virtue and love for Jesus. For Schmidt, who grew up as a Lutheran, Eucharistic adoration made the Catholic faith he learned about in RCIA especially tangible.

“That is not to say there isn’t grace in reading Scripture or reading books about the Faith and listening to videos,” Schmidt said. “But there are special graces just from sitting in front of the Blessed Sacrament that will help enable to transform your faith.”

‘Jesus will give you the time’

People often ask Shaun Fullen, 54, of Massachusetts, how he balances the demands of his work in construction with being an attentive husband and father of five young children, including a daughter in college.

“Between the sleep deprivation I go through with work and family life, if I didn’t have the Blessed Sacrament helping me along, I don’t think I could do it,” said Fullen, who attends Eucharistic adoration twice a week, at 4 a.m. on Sundays and Mondays, at a perpetual adoration chapel managed by the Franciscan Friars of the Immaculate.

Fullen, a former U.S. Army Ranger who wakes up before dawn every day for construction jobs in Boston, said he chose those early morning hours since he is used to waking up while the stars are still out.

“But sometimes I’m so tired, I actually fall asleep,” Fullen said with a laugh. “I ask my guardian angel to at least wake me up before the friars show up to relieve me, but it’s all good. I love it. I really think I’m looked after by Our Lord, in a different way, I think, than before I went to adoration.”

Fullen began attending Eucharistic adoration about 13 years ago when someone asked him if he was willing to become a regular adorer. At first he didn’t know if his schedule could accommodate it, but the person told him, “Jesus will give you the time.”

“If you do right by him, he’ll do right by you,” said Fullen, who told OSV that, during his Holy Hour, he often prays the Rosary and the Divine Mercy Chaplet. At other times, he does spiritual reading or the Stations of the Cross. Sometimes, he just sits and talks to Jesus.

“The Blessed Sacrament definitely keeps us on the path to heaven,” said Fullen, who added that he used to struggle with an addiction to pornography. He said praying before Christ in the Eucharist broke those chains.

“I couldn’t have done it without him,” Fullen said.

Tina Pagliocchini Jenkins, who lives in southern Maryland, described how Eucharistic adoration provided her with a place of peace and quiet when her children were rambunctious toddlers.

“Going there in the middle of the night, everything is just so quiet,” said Jenkins, 52, a professional photographer and mother to 11 children, ages 10 to 28.

Jenkins has been attending adoration for about 12 years. She has the same midnight hour on First Friday that she originally signed up for in her parish’s perpetual adoration chapel.

“I remember walking into the chapel for the first time, and just being hit by the presence of Christ,” Jenkins said. “I remember leaving after and talking to my friends about it. I told one friend who had never gone, ‘Listen, you gotta do this.’”

Jenkins, who converted to the Catholic faith after getting married, described how her own faith has deepened and matured from her time in adoration. Over a five-year period, Jenkins read St. Faustina Kowalska’s diary, “Divine Mercy in My Soul,” during her Holy Hours.

“Every month, there would be something in her diary that would just smack me in the face and totally apply to what I was dealing with at the time in life or with my family,” said Jenkins, who added that Eucharistic adoration has enriched her soul with an “ever-changing constancy.”

Cathy Asinari, 52, of Pennsylvania, said the six hours she spends in front of the Blessed Sacrament every week might be the only time when she truly feels at peace.

“I find that, when I’m in a state of really bad depression, I can go [to adoration] and I can sit there; and he understands. He draws you closer and closer every time you go,” said Asinari, who has suffered from depression her entire life.

Asinari tried to commit suicide two years ago on Good Friday. Though “every day was a fight” because of her depression, Asinari said she never missed a day of work. But after retiring from her job, she lost the sense that her life had a purpose.

“You get to a place where you think, ‘Well, what is my life worth?’ And then, there is no longer that fight to get up in the morning,” said Asinari, who is now on medication and has gone through counseling the last two years.

In adoration, Asinari prays for people who suffer from depression and mental illness. She prays silently and sometimes sings before the Blessed Sacrament, especially when she goes to the chapel at 2 a.m.

“That’s why I like going when nobody else is there. It also gives me something to look forward to,” said Asinari, who, when she is feeling depressed, prays the Sorrowful Mysteries or meditates on the Passion.

“And it’s almost like you’re united to him as you’re in there praying,” she said. “He understands me, and I get to spend time with him. It’s a great place to be.”

The power of Eucharistic adoration

Allison Gingras, 50, of Massachusetts, describes herself as someone with a lot of anxiety. By her own strength, Gingras said she would never travel to China to adopt a special needs child. Yet, that is exactly what she did.

“Only through the power of the Eucharist and the sacrament would I have done that,” said Gingras, a Catholic speaker and author who has been attending adoration for 12 years.

Gingras said she didn’t know much about Eucharistic adoration when a childhood friend’s mother asked her if she would be willing to sign up for a weekend Holy Hour at their parish’s perpetual adoration chapel.

“I started to go, and I just fell in love with the peace I found there,” Gingras said. “I started to feel differently. I’m a very anxious person, and I started to experience a peace I had never experienced before.”

Before spending time in adoration, Gingras described her relationship with God as one based in fear. She attended Mass on Sundays because she did not want to go to hell.

“But since going to adoration and spending that time in his presence, I feel my faith is now more of a relationship,” Gingras said. “It’s not based on fear, but out of love and a desire to want to know him more, and to be with him.”

Gingras said the graces she received from adoration enabled her to discern and to gather the personal courage to travel to China and adopt her daughter, Faith, who is hearing-impaired. She also credits adoration with enabling her and her husband, Kevin, who is a deacon, to weather a financially difficult time a few years ago.

“I don’t think we would have navigated it as peacefully and as well as we did if we weren’t spending time together in prayer at adoration,” said Gingras, who goes to adoration two afternoons every week and one evening with her husband.

Brian Fraga is a contributing editor for Our Sunday Visitor.