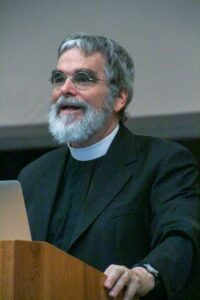 Recently Pope Francis met in a private audience with the 16 members of the Vatican Observatory. We are all priests and brothers who work at the astronomical laboratories in the Papal Summer Gardens outside Rome, or at the Vatican Advanced Technology Telescope outside Tucson, Arizona. We do pretty much the same sort of science as you’d find at any other academic institution.

As evidence of that, we presented the Pope with the published proceedings of a recent workshop we’d held on Gravitation and Black Holes — how we understand the fabric of space and time warped together in the deepest regions of space. That meeting had included Nobel Prize winners and other notables from the field; the Pope had met with them, too.

Just being present in the world of science shows the Church’s commitment to study God’s creation. And often the people who need most to see this aren’t the scientists –– many of them are acting people of faith already –– but the people in the pews back home, who somehow still think there’s some sort of war between science and religion.

But another gift that we gave the Pope tells a deeper story. We also offered him a copy of our 2020 astronomical calendar.

Every year, the Vatican Observatory Foundation publishes a calendar full of glorious astronomical images and marking significant dates in the history of our science. It’s a way of raising money to help support our telescope and our outreach efforts. But hundreds of these calendars are also given away, for free, to inmates in San Quentin and other prisons. All the prisoners have to do is write to us and ask.

The letters we get from them are quite moving. One death row inmate at San Quentin wrote us, “…getting this calendar, I am able to see sights I haven’t seen in 17 years… I am able to look in wonder on such vast creation and just ponder all that is.”

All of us are, in our own ways, prisoners. We’re prisoners of the gravity field that keeps us pinned to planet Earth (at least most of us, most of the time). We’re prisoners of the laws of physics that, so far as we understand them, make travel to the stars just a science fiction dream. We’re also prisoners of our own prejudices and fears, which limit what we allow ourselves to see. Astronomy is a window into a world bigger than our immediate world of sorrows and worries, where we can see a universe that tells us God is mighty and God is good… where we can soar with our imaginations and our souls.

The Pope was delighted to receive our calendar and hear about our outreach to the prisoners. It fit well with the Jesuit apostolic priority, “to walk with the poor, the outcasts of the world, those whose dignity has been violated, in a mission of reconciliation and justice.”

He also pointed out another significance to our calendars. “Here you have … a combination of space and time!”