When I got married nearly 32 years ago, I joined Resurrection Parish where my husband was already a member. Resurrection had just been assigned a new pastor: Father Ray Brenner.

During the next 16 years or so, I became very active at Resurrection; and as my family grew, my respect and affection for Father Ray also grew. His calm and loving presence was a treasured gift to me, not only at Resurrection but also during some of the most difficult moments of my life during those years. When Father Ray announced that he was leaving Resurrection during Mass one Sunday morning, a feeling of great loss swept over me. As I drove home teary-eyed, my young daughter asked, “So will church be closed now?”

“You mean there’s another one?” my daughter exclaimed. “Will he be like Father Ray?”

And of course, it wasn’t. Parish families, like all other families, are forever changed by the loss of loved and cherished family members, and by the bumpy arrival of new ones. Over time, I began to accept the changes at Resurrection; and to my great surprise, I began to develop growing respect and affection for Father Phil.

Over the next 17 years, as Father Phil and I worked together, prayed together, laughed and wept together, I got to know him as a pastor, a boss and a very good friend. I came to realize that a deeply compassionate heart lay beneath his aloof exterior; and although he was in many ways a very complicated person, he was without a doubt one of the most open-minded, generous and humble people I’d ever known. His presence was a treasured gift to me — not only at Resurrection but also during some of the most difficult moments of my life during those years.

When Father Phil died of cancer last October, a feeling of great loss swept over me. As I drove home from the hospice center shortly after his death, weighed down by grief and exhaustion, I looked up at the night sky. There was a glowing moon that night, and two jet streams had formed a cross that hovered over it. I know it was just a coincidence, but a feeling of peace came over me as I contemplated the meaning of that symbol of suffering and loss, death and resurrection, old life being absorbed into vibrant new life.

Next weekend, we will welcome Father Jerry Pratt as administrator of Resurrection. Father Jerry will weave himself into the fabric of our parish just as Father Ray and Father Phil did. And as he does so a new pattern will form, and our parish will change. I may celebrate the changes, or I may complain about the new guy; but either way, I like to think that I am wiser now. I realize that grief and loss take time to heal in parish families just as they do in any other family. And I also realize that although the arrival of an administrator can be a difficult adjustment, it is also likely to be a great gift, the value of which I will only fully appreciate in time. 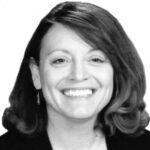 Karen Muensterman is a member of Evansville’s Resurrection Parish.