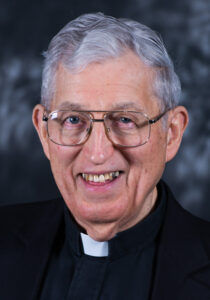 Deacon King, who served as homilist, said, “Our faith calls us to be big-picture people, and I can say one thing for certain about Father John; and that is, he was a big-picture guy. And loving the way he did from that broad perspective, being the unique gift from God that he was, he would remind us all that we are unique gifts from God.

“Father John gave his life (to God) so we could have a sacramental relationship with our Lord.” Deacon King added. “It was what he did, his purpose. It was how he loved, what he hoped in and, in his life, the hope he shared. Actions framed Father John’s life. Where there was a need, he showed up.”

Deacon King also shared a small portion of the sermon from Father John’s 1964 ordination Mass. Then-Archabbot Gabriel Verkamp served as homilist, and he told those in attendance that “Father is prepared to take on the burdens of the priesthood. He will be working in the world but not of the world. He will be working for Christ the King (and for) the kingdom of Heaven.”

Deacon King added, “This is a life of purpose, love and hope; it is a life well-lived.”

He attended St. Meinrad College and St. Meinrad Seminary and School of Theology in St. Meinrad. Evansville Bishop Henry J. Grimmelsman ordained him to the priesthood May 23, 1964. Following is a summary of his pastoral appointments:

During his service as a priest of the Diocese of Evansville, he also accepted the following responsibilities:

He was an avid historian, genealogist and preservationist. He was instrumental in the preservation of the Old Cathedral Library and Museum in Vincennes, and the Chapel on the Hill in Ferdinand. He was honored to have the Old Cathedral Annex in Vincennes named after him in September 2019. Father John was a member of the Indiana, Dubois County, and Ferdinand Historical Societies. He was the Chaplain for the Ferdinand Knights of Columbus Council #14555.

Following the Dec. 16 Mass of Christian Burial, interment was in the St. Ferdinand Church Cemetery. Please keep Father John, his family and the priests of the Diocese of Evansville in your prayers.