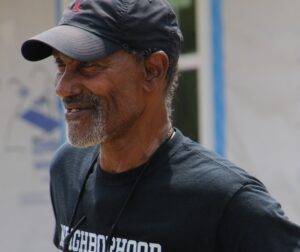 Ground was broken for St. Theresa Place in August 2020. The subdivision shares the land formerly occupied by St. Theresa Parish with the new home of Catholic Charities.

The house is the Tom and Betty Titzer Family Build because the family has a deep connection to St. Theresa Parish. Father Bernie Lutz, Betty’s brother, and Father Joe Ziliak, Betty’s cousin, were both present to pray and bless the house, along with James’ pastor.

New homeowner James thanked each and every person who helped make his home dedication possible. He said he will not disappoint the many people who have supported him and encouraged him along the way.

“I definitely thank God and the entire Core Crew,” James said. “These guys put their hearts and souls into every nail they drove. … This home brings about stability, positivity, strength, accomplishment and honor.”

Habitat Executive Director Beth Folz often has a word to describe each Habitat homeowner, but for James she had two words: grateful and joyful.

“James has worked hard, hard, hard even to get into the Habitat program. … just that work ethic of perseverance,” Folz said. “When he finally got accepted into the program, (he) was extremely grateful and thankful for the opportunity to have such a wonderful home as this. … Anytime you see James, he’s got this huge smile on his face, very welcoming, you just feel the warmth of his spirit anytime you see him. James, we’re so proud of you.”

A Boonville native, James has four adult children, three sons and a daughter. Sadly, his wife passed away from cancer in 2015.

For the last two-and-a-half years, James has lived with his daughter and four grandchildren because the apartment he previously lived in for 15 years was harmful to his health and had numerous problems.

James said his sister suggested he apply with Habitat for Humanity, and when he learned he was accepted, he was ecstatic.

“I haven’t had anything good like this happen to me in a long, long time,” he said.

Future Habitat homeowners are required to put in 300 hours of sweat equity, building, taking financial-literacy classes and being involved in the community to complete the program.

“It’s hard work, mentally and physically, but I’m thankful for this opportunity,” James said. “I have met a community of people that I wouldn’t have ever known if it wasn’t for Habitat.”

His home is the 539th completed by Habitat Evansville.

“To me, this home will mean security,” James said. “It will mean that no one can evict me. Every penny I worked for will be going into something that I can say is my own; it’s meaningful and uplifting. ... I’ll have a place where I can lay my head on a pillow at the end of the day. It just means a whole lot to me, even at my age.”

James hopes to continue working with Habitat’s Core Crew because he loves working on the houses.

“There is no doubt that God is walking around that place; these people are living it,” he said. “Their hearts are so big and so caring for people who are struggling and who couldn’t have attained what they have acquired without the help of Habitat.”