Labor Day honors the contribution workers make to America. Handy Helpers Home Repair, a social-enterprise business developed and operated by Catholic Charities of the Diocese of Evansville, doubles down on Labor Day by preparing people to move from out-of-labor-force to full-time employment.

This year, nine individuals will make that move thanks to Handy Helpers. 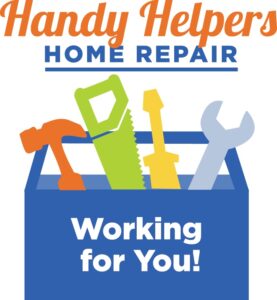 Director of Catholic Charities Sharon Burns said, "Catholic Charities is about helping people create lives that work, and the Handy Helpers program literally does that!" The program is designed to help individuals prepare to enter the labor force while offering handyman services to local homeowners and businesses.

Handy Helpers employees, called technicians, are paid a wage to work for six months. During the six-month employment period, they gain the soft skills of working – like arriving promptly, taking instruction well and working in teams. Each technician is also paid to dedicate 8 hours each week to improving his or her life and removing the barriers to stable employment.

Common barriers include lack of a high school diploma, an invalid or no driver's license, or little family and childcare support. During the final month of employment, each technician receives assistance in finding permanent marketplace work.

Like any small business, Handy Helpers Home Repair owns tools and equipment, including two work trucks, and operates out of an office located at 600 Herndon Drive in Evansville.

Each day, 4-6 technicians arrive and get their work assignments for that day. They've cleaned gutters, repaired drywall, put new locks on doors and completed spring yard cleanup – all for a reasonable hourly fee.

"The combination of soft work skills, technical skills and mitigation of the barriers to work offers a recipe for successful long-term employment," Burns said. "We expect our technicians to receive a living wage and health benefits at their marketplace job, and we ask employers to pay at least $15 an hour for our technicians. We are grateful for the assistance of many local businesses who have offered us advice, funding and of course, demand for technicians completing work with us."

To date, two technicians have moved to employment with local firms. Three more are preparing to apply for permanent jobs in Evansville, and another crew of four just began their work with Handy Helpers in August.

For more information, or to schedule Handy Helpers technicians, call 812-913-9800 or visit https://www.handyhelpersevv.com.