ARLINGTON, Va. (CNS) — As World War II veterans and world leaders gathered on June 6 at the American cemetery of Colleville-surMer in Normandy, France, to commemorate the 75th anniversary of D-Day, one highly-decorated veteran who took part in that Allied invasion was laid to rest in an American cemetery half a world away.

At Arlington National Cemetery just outside of Washington, D.C., Carl Mann Sr., a lifelong Catholic from Evansville, was buried with full military honors as his family and friends gathered around. He died March 30 at age 96. He requested his burial take place at Arlington on the D-Day anniversary.

As an Army sergeant, Mann was among the troops who stormed Omaha Beach in Normandy on D-Day June 6, 1944. He was awarded three Purple Hearts and seven Bronze Stars for his service in the 5th Infantry Division of Gen. George S. Patton’s 3rd Army. He was involved in all five major battles of the European Theater.

“While many have served their nation admirably, Sgt. Mann shed his blood for the freedoms we put so much trust in today,” Father Joseph Adams, an Army chaplain with the rank of captain, said during the service.

“Therefore, he should forever be revered by his country.”

Son Carl Mann II, who was presented the flag that had draped his father’s casket, told the Evansville Courier & Press that Carl Sr. “would be honored, humbled, embarrassed” about all the attention. “He would really want the discussion to be about those who gave their lives.”

He added that the funeral “helps us bring closure. Dad always taught us not so much to move on but move forward.”

Carl Sr., an active member of Holy Spirit Church, now Annunciation Parish, in Evansville, was born Oct. 24, 1922, in Mount Vernon, Indiana, to the late Karl J. and Arvilla (Thompson) Mann. In addition to his parents, he was preceded in death by his wife of 64 years, Dolores (Therrien) Mann; by a son, Father Gordon Mann, who died Feb. 28 after a battle with leukemia; two sisters, Mildred Williams and Helen Roy; and a brother, Robert Mann.

Father Mann, his middle son, was ordained as a priest of the Diocese of Evansville on the anniversary of D-Day in 1992. His final assignment was as parochial vicar of St. Philip Parish in Posey County.

“My brothers and sisters have been aching since dad passed,” Miles Mann told the Courier & Press. “It’s nice to finally lay him here at Arlington and let him go home. The rest of us can understand it’s time to turn the page.” 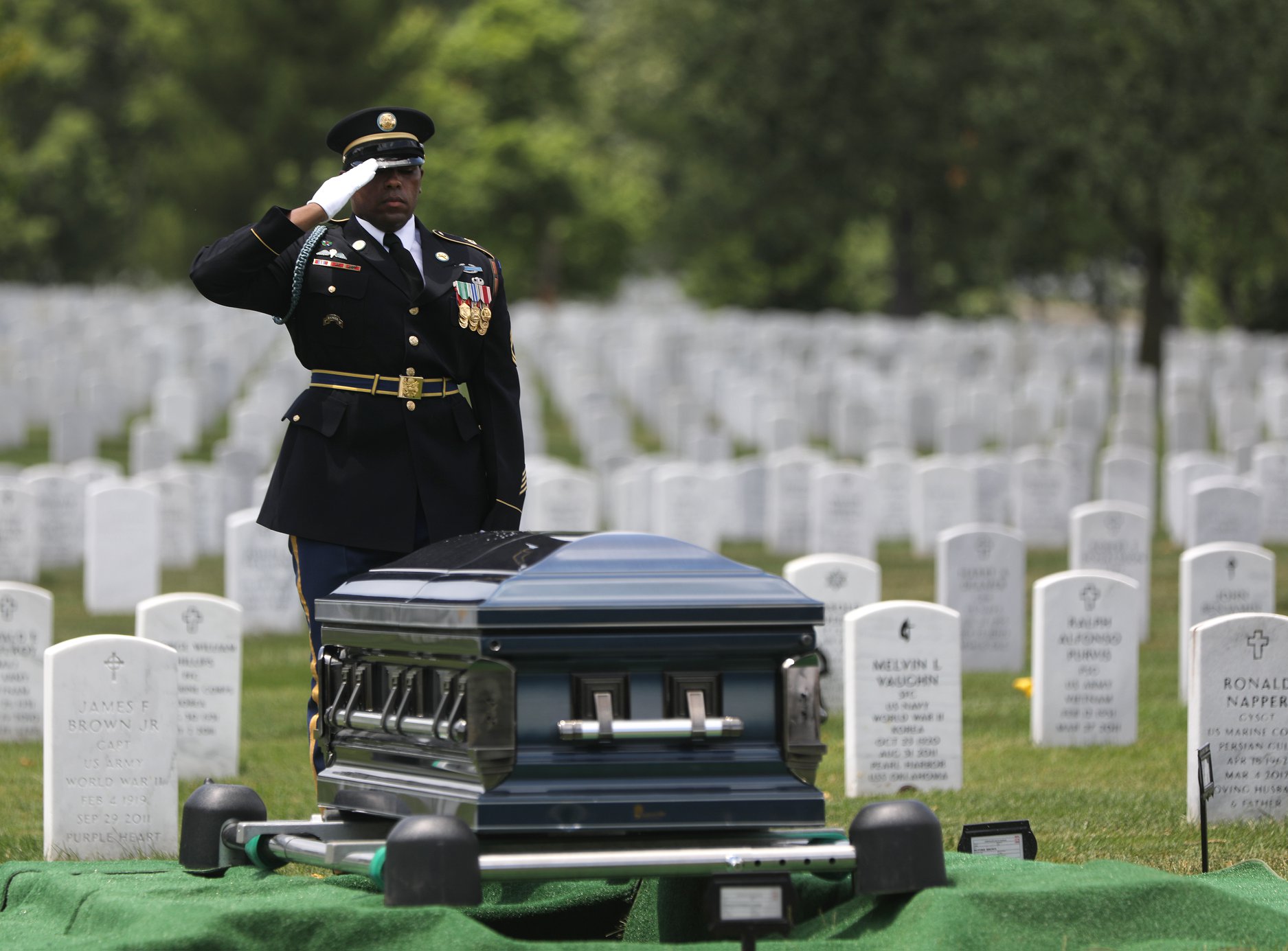 CNS photo/Bob Roller
Please like and share this photo to honor Sgt. Mann, the soldiers with him at Normandy that day and his late son, Father Gordon Mann, who was ordained to the priesthood on June 6, 1992. Father Mann died in February after a courageous fight against leukemia. May Sgt. Mann and Father Gordon rest in peace.