Knights of Columbus Councils from Dubois and Spencer counties welcomed a record crowd of more than 470 to the Huntingburg Events Center for the 7th Annual Father Michael McGivney Vocations Dinner. Known as the clergy appreciation dinner, the Knights annually recognize priests, deacons and religious serving parishes in other ministries in the two counties, and they provide financial support to diocesan seminarians and the two monasteries in the counties – Monastery Immaculate Conception in Ferdinand and St. Meinrad Archabbey in St. Meinrad.

Leugers kicked off the program with a report on the Knights’ ongoing support of Gibault Children’s Services in Terre Haute. Founded in 1921 by the Indiana K of C as a home for wayward boys, Gibault has expanded to now serve more than 10,000 children and their families. Leugers said the Jasper Knights annually prepare a summer barbecue for the young people and deliver it to Terre Haute.

Marge Beckman then gave a report on the Daughters of Isabella. Beckman is Regent of the Daughters’ Jasper Circle #140. She discussed the Daughters’ work with and support of St. Elizabeth Coleman Pregnancy & Adoption services in Indianapolis.

Knight Tim Jarboe of Jasper gave a report on the Father Michael J. McGivney endowment, which provides funding for grants to support Diocese of Evansville seminarians and novices. He thanked the more-than 1,900 Knights from the councils listed above for their ongoing support of the Father McGivney Fund and their general support for priestly and religious vocations.

During his talk Zielinski noted that the Indiana State Council has blended the K of C national Refund Support Vocations Program with the state Support Our Seminarians Program to provide sponsorship for all 91 seminarians in Indiana. He saluted the strong support received from Knights across the state for the RSVP and SOS programs.

Zielinski focused on evangelization and vocations in his address, calling them “two sides of the same coin.” He talked about the K of C’s formation of the Catholic Information Service in the late 1940s, which has distributed more than 9 million pamphlets with information on Catholicism. He noted that the K of C donated a shortwave transmitted to the Vatican in the mid-1960s for use by Vatican Radio, and that the Knights continue to support satellite uplinks that bring events from the Vatican into homes around the world.

“Our goal is to bring the message of God’s love to the world – especially to those who are hungering for the truth,” he said.

Following Zielinski’s remarks, the Knights recognized the priests, deacons and religious who are serving parishes in Dubois and Spencer counties. Father Boeglin also recognized the legacy of the late Father Gordon Mann, who served several years at Our Lady of Hope Parish in Washington, and he presented a 50-year pin to Father Ray Brenner, retired priest of the Diocese of Evansville, former pastor of St. Joseph Parish in Jasper and former Dean of the East Deanery. 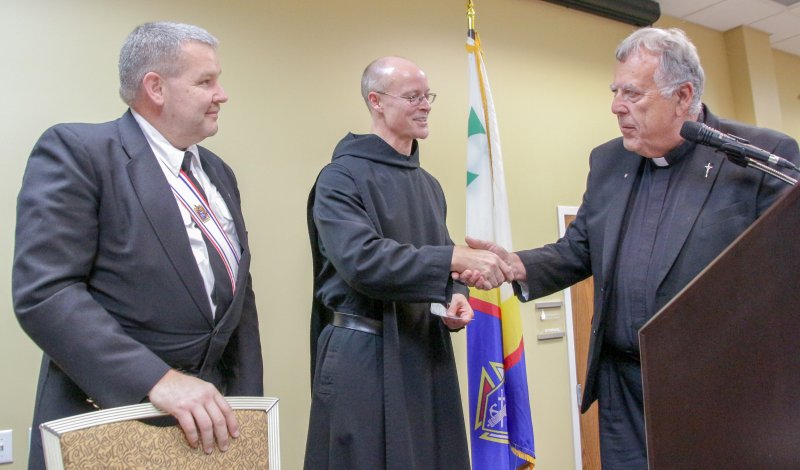 Benedictine Father Adrian Burke of St. Meinrad Archabbey in St. Meinrad, center, accepts $2,000 in donations from the Knights of Columbus during the Oct. 29 Clergy Appreciation Dinner in Huntingburg. Making the presentation are Mike Stone, left, Grand Knight of Jasper Council 1584, and Father John Boeglin, pastor of Holy Family Parish in Jasper and K of C Chaplain. The Message photo by Tim Lilley