Growing up, my family went to Mass every Sunday (often late). Besides that, my mom was the only one of us six who devoutly practiced her faith. She was a daycare sitter, so I grew up with many siblings. My dad was an honest car salesman and landlord for most of my life. My older brother, older sister, younger brother and I were primarily focused on school, extracurricular activities (especially band), and work. Our family’s favorite pastime, without a doubt, is camping in the various state parks Indiana has to offer. 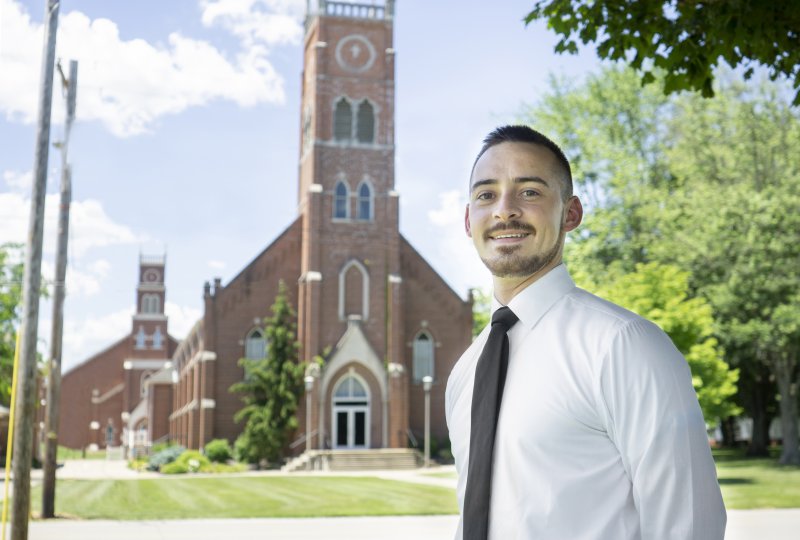 The first time I thought about priesthood, I was in first grade religious education class when our catechist explained that God asks some men to be priests; some say yes and some don’t. My 7-year-old self thought, “That’s stupid! You mean, sometimes God asks men to be priests, and they tell Him, ‘NO’?!” Then she said it, “And God might be calling some of you boys in this room right now to be priests too...” I wish she’d never said that (haha).

I was extremely active inside and outside Jasper High School (work, band, boy scouts, student council, AP classes, occasional Bosco Youth Ministry trip, ultimate disc, track). I never had time to think about my calling in life until I was stuck as an undecided student at Purdue University trying to pick a major. It was my senior year of high school, and I was feeling lost at Purdue when I finally started intentionally wondering why I was Catholic.

There was no single, clinching moment when I finally decided to enter seminary. I had left Purdue, was working at home in Jasper, and spending time with my mom who had breast cancer when I just slowly kind of realized seminary was the next logical step I was heading toward. I must add, though, that visiting my cousin Eric when he was in seminary resolved many misconceptions I had about seminary. It’s not what most people think it is. You can enter seminary and still be yourself.

What is the best way to encourage vocations? This is a big, comprehensive question I am not sure I can answer. Many people think it’s a matter of pointing out to men in conversation that they would make a good priest. The first person to tell me this was either my mom or grandma. It’s more than that, but that does help. I think the most helpful thing, ironically, would be helping men ignore what people tell them. What I mean is that the majority of the world will naively tell you to pursue things that are earthly and shallow (money, sex, power, education, sports, etc.). How much do these things matter compared to what’s in store? Teach them to pursue that which sustains. Patiently knock the secular mold off of them. The less attention we give to creation, the more we give to the creator.