Diocesan Director of Youth and Young Adult Ministry Steve Dabrowski has announced that Sister of Providence Jessica Vitente is the new campus minister at the Newman Center serving the University of Evansville. Sister Jessica began her duties on Sept. 8. 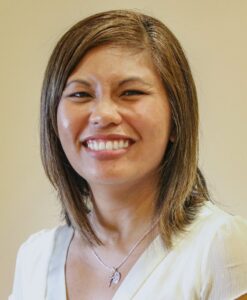 Dabrowski said, “Sister Jessica comes to us from California where she spent several years ministering to young adults. She is already making her presence known both on campus and among the Newman Center students, and we are excited to see the great things that will be accomplished through her in the years to come.”

Sister Jessica is a native of Pomona, California. She earned an Associate’s Degree in accounting from Mt. San Antonio College in Walnut, California, and a B.A. in Human Development from California State University, Long Beach. She entered the Sisters of Providence in September 2018.

Since then, Sister Jessica has served as a Young Adult Ministry leader, and she also has served at the Providence Spirituality and Conference Center. She has volunteered with the team at Helping Others Meaningfully Engage (HOME), and she has taught English as a second language at the St. Louis County Jail in Clayton, Missouri.