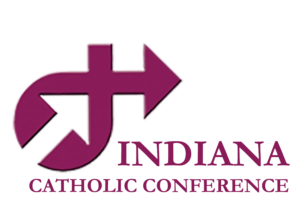 As lawmakers returned to the Statehouse in Indianapolis this week to begin a new legislative session, the Indiana Catholic Conference stood ready to speak on the key issues of the day, always standing in solidarity with the most vulnerable.

The 123rd Indiana General Assembly opened for business Jan. 4 for a short, non-budget-year session that is expected to wrap up by mid-March. State lawmakers will introduce and debate a flurry of bills on a wide range of topics. And as it has for the past 55 years, the ICC will weigh in on important legislation while engaging as many Catholics as possible in the process.

“The ICC is the public policy voice for the Catholic Church in the state of Indiana,” said Angela Espada, executive director of the ICC. “Simply put, we advocate either for or against proposed legislation in line with the long and rich history of Catholic social teaching.”

Espada explained that promoting the common good and protecting the most vulnerable members of society form the basis for the Church’s engagement in the public arena.

“If you look at the issues that politics hits on, much of it has to do with immigration, education, whether to have a social safety net and how far that net expands, and respect for life,” Espada said. “All of these are issues that the Church has experience in, and has either advocated for or against in some form, since its beginning – certainly long before there were lobbyists and massive political agendas.”

Protecting human life from conception to natural death remains the most pressing of the Church’s priorities – and, therefore, the ICC’s. Abortion is at the forefront of the national debate again, as the Supreme Court has recently considered pro-life legislation in Texas and Mississippi that has been challenged by abortion advocates.

Indiana Speaker of the House Todd Huston (R-Fishers) stated during his recent Organization Day speech for the state legislature that Indiana is following developments at the Supreme Court.

“In Indiana, we have a strong history of standing up for the rights of the unborn, and we’ll continue to build on our pro-life efforts this session,” Huston said.

Throughout its history, the ICC has supported pro-life initiatives brought before the General Assembly, Espada said. That includes standing up for the unborn while opposing the death penalty and assisted suicide. Pro-life efforts can take a variety of forms, she emphasized, pointing to recent efforts by the legislature to increase accommodations for pregnant women in the workplace – from longer and more frequent breaks to temporary transfers to less strenuous or hazardous environments.

“The legislation that passed last year did not go far enough, and we’d like to see something better this year for expectant moms,” Espada said.

With COVID cases once again on the rise, efforts to stem the pandemic are likely to dominate conversations at the Statehouse during the 2022 session, according to Alexander Mingus, associate director of the ICC.

“We anticipate lots of discussion around COVID response, especially concerning vaccines and exemptions,” Mingus said. Espada added that the ICC will be particularly interested in the debate as it concerns religious freedom and liberty.

With inflation rising sharply nationwide, Espada and Mingus expressed hope that a long-overdue update of the Temporary Assistance for Needy Families program would finally pass the state legislature. TANF is a federal government program that provides grants to the states for distribution to families in dire economic circumstances. Because of outdated state guidelines, the $288 maximum monthly cash payment for a family of three in deep poverty has not been adjusted for inflation since 1988.

Much to the dismay of the ICC and other advocates for the poor, proposed legislation to update TANF has been passed over in recent legislative sessions.

“Even though TANF money flows to the states from the federal government and is readily available, Indiana has not offered an increase in monthly payments for the neediest of the needy in more than three decades,” Espada said. “With COVID continuing to devastate our economy and inflation on the rise, we need these changes more urgently than ever.”

She and Mingus call on the Catholic faithful for their prayers during the 2022 legislative session – as well as their active engagement. They encourage everyone to visit the ICC website, www.indianacc.org, which offers access to I-CAN, the Indiana Catholic Action Network. Those who sign up for I-CAN receive action alerts on important legislation and ways to contact their elected representatives.

“This is the best way for everyone to stay engaged with us throughout the legislative session and all year long,” said Mingus, who was instrumental in recently revamping the ICC website and introducing the weekly podcast that he and Espada host during the General Assembly. “If anyone has family members, friends and fellow parishioners who aren’t aware of the ICC, we ask that they encourage them to sign up for I-CAN and stay up to date through our podcast and other resources.

“We need everyone’s help to spread the word that we exist, and ultimately to support our work on behalf of the Church.”