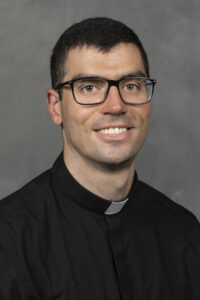 As I approach my priestly ordination on June 5th, the most common question I’ve been getting has been some variant of “Do you feel ready?” I’ve often jokingly responded, “We’ll find out!” or “I hope so!” The truth is, I have been saying “yes” to this vocation for many years. Every day of seminary formation, for myself a six-year pattern of prayer, study, ministry, discernment, spiritual direction and self-reflection, has been another “yes” to the promptings of the Holy Spirit. This process has affirmed and brought into focus a longing to serve as a priest of Jesus Christ that has been on my heart since middle school.

Growing up, I wasn’t always sure where the Lord was leading me; but it was always clearest when I was closest to Him in prayer and in the sacraments. There were times where I wished this strange desire for the priesthood would go away, and there were times when I was sure the Lord didn’t know what He was doing. There have been sacrifices, but I’ve learned that God cannot and will not be outdone in generosity.

Eventually, I realized that God’s plans for me were simply bigger and more beautiful than my own; and that, if He was placing this longing on my heart, there would be nothing else that would fulfill me in the same way. My first “yes” to this vocation was in a moment of grace on a TEC retreat at the Air Force Academy in 2014, and it continued in a more formal way as I applied to become a seminarian for the Diocese of Evansville and then entered Saint Meinrad in the fall of 2015. I’ve gradually learned to use the gifts God has given me for the glory of his kingdom; but more importantly, I am perpetually learning to accept and serve Him even from my weaknesses.

More than anything I’ve learned that the best and only explanation for my priestly vocation is this: it has been God’s will for my life. I, like many brothers before me and many more to follow, have been chosen by God by for the priesthood based on no merit of our own but simply by the Father’s choice for us to share in his Son’s priesthood. Bishop Siegel will confirm this choice through the laying of hands and invoking the Holy Spirit when he ordains me this Saturday. I am overwhelmed by the gift of this vocation, and pray that I will serve it well and faithfully all the days of my life.

For that reason I ask for your prayers in a special way at this time – the biggest “yes” of my life is about to come, but it will not be the last. Each day will present new challenges and a chance to live more fully into the gift and mystery of the priesthood. I am grateful for the support of my family, who raised me in the faith and were the image of the Father’s love for me. I’m grateful for my parish family at St. John the Baptist in Newburgh – where I’ve received every sacrament but baptism and attended school for nine years. I’m grateful for my years of formation at Saint Meinrad Seminary and for my two years of pastoral ministry at St. Boniface on the West Side of Evansville. I am thrilled to be headed to St. Francis Xavier in Vincennes and St. Philip Neri in Bicknell for my first assignment, and ask for the prayers of my newest parishioners and pastor Father Tony Ernst in a particular way.

Do I feel ready? I’m ready and eager to once again say “yes;” and the rest is up to God!